Return an ItemWarrantyReturn a Core

FAQs
Available in the contiguous U.S. only. Must choose Next Day Shipping at Checkout after entering code.

BUY AUTO PARTS IN THE NEWS

February 20, 2015 - San Diego, CA - After BuyAutoParts.com publicly announced the hiring of Adrian Crisan, a highly skilled and innovative information technology and business professional, as Chief Information Officer, the San Diego Business Journal highlighted some of Crisan’s accomplishments. As mentioned in the San Diego Business Journal, as CIO, Crisan will be responsible for leading the information technology and information systems development at the fast growing auto parts company.

“We are excited to have Adrian join our executive team here at BuyAutoParts.com. He brings a range of skills which are extremely valuable in today’s online business place and he will be an integral part of the growth of our company” stated BuyAutoParts.com CEO Dara Greaney. “The growth of our information systems and technology coincides with the growth of the company as a whole. Adrian’s vast experience indicates that he is the right person to lead that growth.”

Crisan has over 25 years of proven experience in program management, hardware, operating systems, web services, infrastructures, and software and platform development. He also has over 16 years experiencing managing people and complex projects. Crisan’s career began in the 1989 working for the technology company Compaq, which later merged with HP. In his 18 years at Compaq/HP Crisan rose through the ranks and eventually became a Director of Global Alliances. In 2007, Crisan moved to San Diego, California where he was hired by Sony Electronics as a Director of Engineering. Most recently, he was the Vice President of Software Engineering at AutoAnything (an AutoZone company). Over his career, Crisan has 31 published patents, the most recent was published in July of 2014. For a more detailed summary of Crisan’s career you can review his LinkedIn profile.

Crisan was quoted saying that what most excites him about joining the Buy Auto Parts team is the transition the company is undergoing, from being an auto parts company that sells on the online to a technology company that happens to sell auto parts. BuyAutoParts.com is building technology solutions for customers that are both innovative and modern, and this is the technology Crisan will lead. Under his leadership, we plan on making it even easier to buy auto parts online.

Crisan holds a Bachelor’s Degree in computer science from Rice University and a MBA from the Mays Business School at Texas A&M. Crisan’s education highlights a rare mix of extremely technical skills with business skills.

Crisan’s hiring is the latest addition to the company’s growing executive team. As CIO, he will work alongside Dara Greaney, CEO, Matt Glauber, COO and Chris Struempler, CFO. 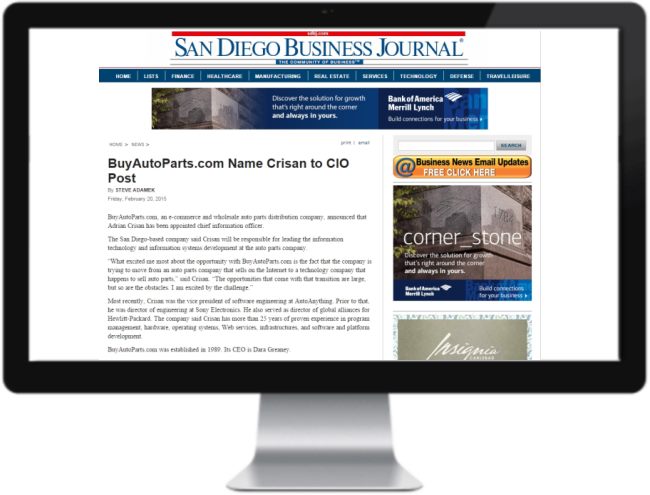