SCT Tuners is a company founded in 2003, which specializes in the production of handheld performance programmers and fuel economy programmers. It is based in Sanford, Florida. The brand is also renowned for producing custom tuning software. It mainly supplies components for Ford, General Motors, Dodge and Chrysler automobiles. The company's range of performance tuners focuses on increasing the engine's power output and throttle response while its fuel economy tuners aid in customizing the Powertrain Control Module (PCM) to obtain an optimal fuel economy. In 2014, SCT Tuners and Bully Dog merged to form Derive Systems. 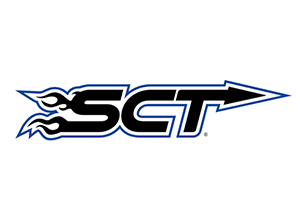 The line of SCT Power Flash Programmers offers an easy installation process. They have the capacity to store ten custom tunes. These tuners come with an LCD display and USB interface cable. The Livewire range of programmers is equipped with a touch screen display, performance calculator and built-in wifi option. These programmers also support readings from rear view cameras and can store up to 10 custom tunes. The iTSX/TSX programmers feature a wireless tuning option. These programmers are capable of running performance tests and reading/clearing DTC codes. They also back up factory tunes. The brand's Economizer programmers significantly increase the fuel mileage of your vehicle and are suitable for various vehicles driven by gas or diesel. SCT Tuners' Exhaust Gas Temperature Sensor Kits are built with a stainless-steel EGT probe. Their RFI-Shielding ensures a precise monitoring of the vehicle. In addition, the company manufactures Eliminator Single/Multi-Program Switch Chips. These chips employ mountable switch panels and allow for an easy installation.

The brand's impressive line of products is designed with an intent to provide a user-friendly experience to its customers, in addition to offering the ultimate performance and flexibility. SCT Tuners rolls out updates to its range of programmers and tuners to keep with the growing requirements of the customers.

SCT Tuners provide a flexible, complete tuning experience, depending on your requirements. BuyAutoParts.com is pleased to stock top-quality SCT Tuners and accessories at the best prices online. If you do not find the SCT part you are looking for or if you are unsure of the right fit, you can give us a call on our toll-free support line or leave us an email. We have a brilliant team to assist you in buying parts at BuyAutoParts.com. We sell our parts at the best prices and provide special discount offers at times to help you save money when you shop at BuyAutoParts.com. Keep checking our site to avail the special offers. To stay connected with us, you can also follow us on our social media profiles.