Warn is one of the leading North American manufacturers of off-road parts and accessories. It was established on June 10, 1948 by Arthur Warn. The brand's headquarters are in Clackamas, Oregon. It manufactures an extensive line of aftermarket, OEM and industrial parts. Under the range of industrial components, Warn offers electric and hydraulic winches. The current line of products offered by the brand includes bumpers, mounting systems, winches, off-road lights, plow systems and body armors. The company's parts are marketed in more than 65 countries across the world. Major car manufacturers including Ford, Chrysler, Kia, Land Rover, Navistar, John Deere and Honda use the brand's parts in their vehicles.

Prior to the establishment of the company, in the 1930s, Sadle and Arthur Warn were running a Willy's dealership in Washington. After establishing the company, Warn began manufacturing wheel locking hubs, which he used to convert the leftover Jeeps used in the Second World War into on-road automobiles. With the growing demand for wheel locking hubs in the following years, the company became well known in the market. Around the mid-1950s, Warn's wheel locking hubs were used by major car-makers in the domestic market as a supplementary factory part in their vehicles. 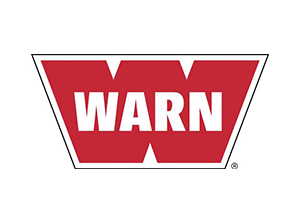 In 1959, the brand built the first recreational winch with unique features including a rugged drivetrain. These winches were the first of their kind and were successful among customers. The company's product line expanded in the 1970s with the inclusion of manual and automatic hubs, innovated electric and hydraulic winches, heavy-duty winches and improved winch mounting systems. In the late 1970s, Warn entered an agreement with Ford Motor Company. It supplied hub sets for Ford’s Bronco and F-Series vehicles initially. In the 1980s, Warn produced the first 3-stage planetary gear train and free-spooling clutch. It also manufactured the first winch produced for all-terrain and utility-vehicle market in the same decade. In the mid-2000s Warn introduced revolutionary designs including the PowerPlant compressor winch and PullzAll hand-held electric pulling tool. Warn supplied winches to the United States military's M-ATV program in 2009.

With revolutionary innovations throughout its years of history, Warn continues to stand out for its quality and durability. Even as it continues to experiment with new ideas and concepts, the brand also makes improvements to its existing product lineup. Warn holds over 110 patents, which is a testament to its contribution to the off-road market. Its products have served as a basis for several off-road accessories produced today. The brand has rolled out a new product line named WARN Works to cater to the needs of professional workers and DIYers. This range of products focuses on developing tools that can deliver a higher power output for severe-duty needs.

Warn has won several accolades for its winches and other parts. In 2002, the brand received the Manufacturer of the Year title from Performance Warehouse Association. The company's high quality standards fetched it the Quality Achievement Award from Polaris Industries in 2004. In 2005 and 2014, Ford Motor Company presented Warn with the World Excellence Award.