BedRug is an American manufacturer of vehicle bed liners and mats. Its headquarters are in Old Hickory, Tennessee. Initially, the firm manufactured TPO foam composites and later entered into the production of automotive bed liners and mats. The brand also manufactures cargo van mats and trailer-ware. The company was owned by Wise Industries, which was later acquired by THI Corporation in 2009. BedRug's liners and mats are used by a wide range of automakers including Chevrolet, Dodge, Ford, Honda, Isuzu, Mazda, Nissan, Toyota and Volkswagen.

The brand's selection of bed liners includes BedRug and BedTred Pro Series truck bed liners which are made to provide an exact fit for your application. BedRug liners are ultra-tough and possess a non-skid surface. This keeps your cargo from sliding during transit and protects them from any damage. BedRug liners are built to resist extreme conditions and can remain undamaged when exposed to hard acids. They incorporate a built-in hinge to prevent accumulation of debris in the small space between the bed and the tail-gate. These liners are also UV-resistant and easily cleanable. 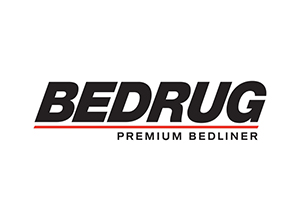 The BedTred Pro Series are exclusively produced to withstand dents and damages caused by heavy cargo. These liners have an easy hook and loop installation. The BedTred Pro Series is made of foam with 1/4" thickness that does not absorb water and helps drain it through its zipped perimeter. In 2009, the brand's BedTred was recognized as the Best New Exterior Accessory by the Specialty Equipment Market Association.

BedRug produces liners in various configurations. The company's liners can be used in automobiles that have a drop-in liner or spray-in liner already installed in them. The company also produces liners that can be directly installed in a truck bed with no existing liners. In addition, BedRug designs liners for tail gates. The brand offers an exclusive line of liners/mats for Jeep vehicles. The range of cargo van mats manufactured by BedRug comprises the VanRug and VanTred series. These cargo van mats, in addition to protecting the carpet, serve the function of insulating the vehicle from heat and noise. Specialty Equipment Market Association awarded the brand's BedRug mats with the Best New Merchandising Display award in 2009. BedRug builds liners for trailers in two variations: standard and premium kits.

All bed liners/mats of BedRug need no drilling during installation. They can be easily removed, cleaned and re-installed within minutes. Furthermore, they prevent your truck bed from getting scratched. To maintain environmental sustainability, the company manufactures its products with completely recyclable polypropylene. To acknowledge the company's commitment towards developing the best-quality liners, General Motor Corporation awarded the brand with the Best Professional Grade in 2002. In the same year, BedRug received Specialty Equipment Market Association's Engineering Excellence award.

If you are searching for truck bed liners/mats that are durable, reliable and can match and enhance the look of your truck, BedRug parts are the right choice. BuyAutoParts.com stocks authentic liners and mats from Bed Rug at the best prices online. Browse through our extensive catalog and select the bed liners of your choice.