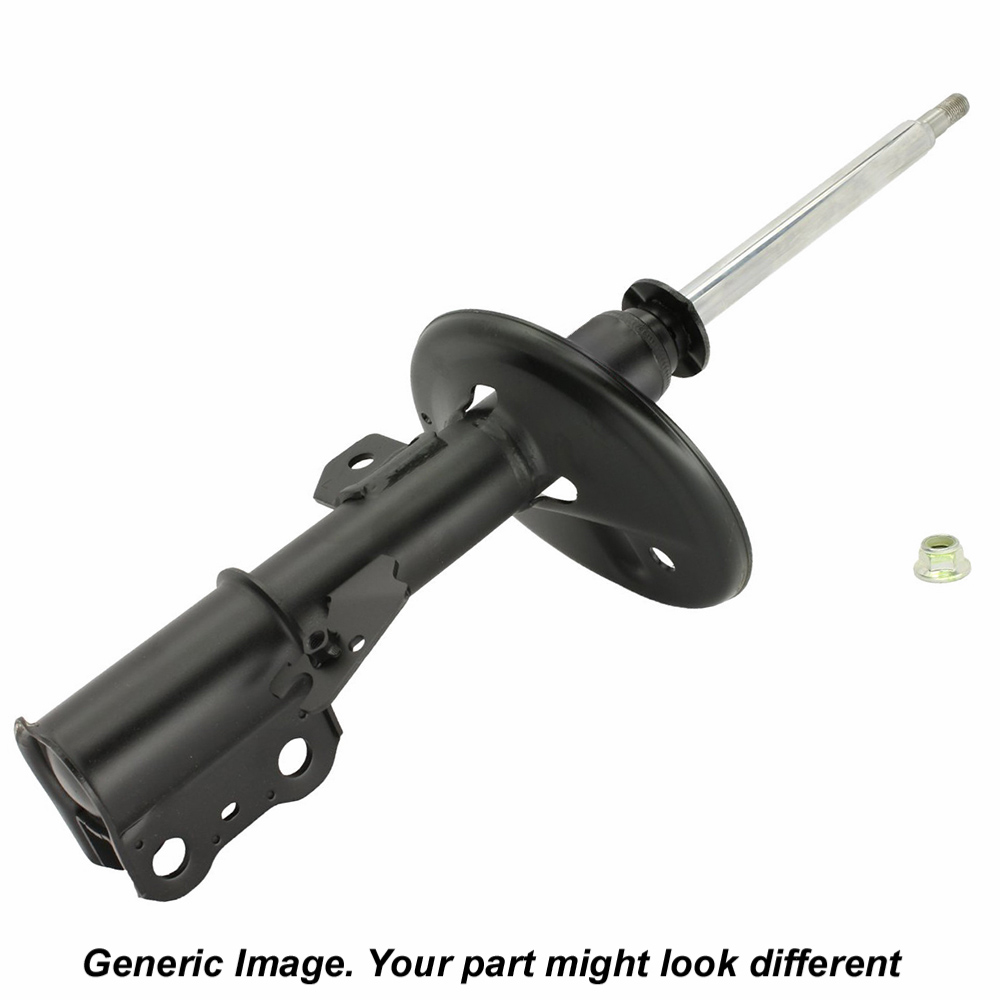 A vehicle's suspension system plays two major roles. It ensures a comfortable driving experience for the passengers and assists in the handling of the vehicle. When it comes to a smooth driving experience, shock absorbers and struts are the parts that have the most integral part to play. Any problems in the suspension system will put a serious dent in the effortless handling of a vehicle, which can sometimes put you and other drivers on the road at serious risk.

Depending on the factory configuration, your car can either have a shock or strut installed on the wheels. It is important to know that a shock absorber and a strut cannot be interchanged with one another while replacing them. Therefore, before replacing any defective parts in your suspension system, it is important to know what mechanism is used in your vehicle. If you have any questions about our replacement shocks or struts, feel free to let us know; our support team is at hand to help you out.

Buying Struts and Shocks from BuyAutoParts.com is Trouble-free!

From causing mild to severe vibrations, a faulty shock absorber or strut can spoil your driving experience to a great extent. We understand how annoying it would be to travel in a car that lets you feel every dent and bump in the road through excessive vibration and shaking. However, do not despair, since you have every chance of replacing your faulty front or rear struts/shock absorbers with brand-new parts from BuyAutoParts.com. Here, we stock factory-grade shocks, struts and strut assemblies which are available at affordable prices. Our parts will help restore the original smooth handling and efficiency of your vehicle. Speaking of replacement parts, we have parts for almost all car makes and models. Therefore, you are very unlikely to run into the problem of not finding the right part for your vehicle. Here is the list of suspension parts we stock in our inventory.

Shock absorbers and struts are often misconstrued for one another, due to the similarity in their appearances. They are basically employed for the same function, with some minor differences in their construction and design. Below, we have elaborated on the basic concepts of a shock absorber and strut, and how to tell them apart from each other. Here are some of our articles and related videos on repairing suspension parts.

The shock absorber is a dampener which absorbs the vibrations caused in the vehicle by converting the car's kinetic energy into heat energy. They are also responsible for keeping the tires in contact with the road while providing an optimal ride quality and safety. While cornering or negotiating sharp turns, the shock absorber works to prevent an excessive vehicle body lean or roll in any direction. In addition to stabilizing the vehicle, the shock absorbers also contribute to minimizing the tire wear and protect the overall suspension system, as well.

The shock absorber or shock is located between the car's frame and wheels. The shock absorber mount is attached to the piston rod which is connected to a piston. The piston is fitted inside a cylinder filled with hydraulic fluid. This simple mechanism dampens most vibration in the vehicle. When the shock receives an impact due to a bump, it compresses the fluid, exerting pressure inside it. A piston attached to the top of the cylinder moves up and down, based on the suspension movement. As the piston moves, the fluid is forced out through orifices, which along with the check-valves, limit the amount of fluid that flows through the piston. This slows down the piston movement and thereby, reduces the spring movement, as well. This ensures that the driving experience is bump-free.

Some shock absorbers allow drivers to manually adjust the valves in the shock absorber for better control of the ride, it can also be achieved remotely in some high-end vehicles. Often, it is the coilover shocks that are confused with struts due to their similar designs.

The strut usually has an upper strut mount connected to its one end while a bump stop is attached to the lower end. The bump stop prevents metal-to-metal contact of the strut with the other suspension components, while also adding to the shock absorbing ability of the strut, when it reaches its limit.

In the case there is a defect or irregularity in the bump stop, strut mount or the shock section, they can usually be replaced individually to fix the problem. After installing the new part, all these three components need to be aligned with one another to ensure their proper functioning. In some strut designs, the strut mount, bump stop and the strut come together as a single unit. These types of struts are called loaded struts. In case of the failure of a loaded strut, the entire assembly needs to be replaced. While replacing these struts, care should be taken since the coil spring needs to be compressed. Apart from loaded struts, there is also another category of struts that come with replaceable cartridges. These struts can be replaced easily without having to remove the strut from the vehicle. During the replacement of any kind of strut, the wheel alignment also needs to be checked.

Common Problems with Struts and Shocks & their Consequences

Whether it is a strut or a shock, they suffer from almost similar problems. One of the most common problems with a hydraulic shock or strut is leakage of the fluid from the cylinder. This can result in diminished dampening performance from the shocks and struts. Other problems with the struts include worn-out springs and hardened bump stops. Some of the common symptoms of bad struts/shocks include shifting of the car to one side while cornering, or aggressive vibration of the vehicle, especially when driving at high speeds. Struts are generally priced higher than shocks, and also tend to have higher labor and repair costs than shocks.

Replacing a Strut or Shock Absorber

This video shows you how you can replace your rear shock absorber.
In this article we explain the procedure to replace a strut assembly.

Strut Assembly Best Sellers! Use The Vehicle Selector Above To Find Yours!

At Buy Auto Parts, we not only look to find you the best deals on the parts you need, we are also committed to offering you useful resources and information about auto parts. Be sure to check out our How-To articles and videos, meet our pros, and get involved with our online community.

Let's start here with an overview of strut assembly. A strut is basically a shock absorber mounted inside the coil spring. It is a suspension component that is designed to resist compression, which combines the function of the coil spring, spring seat, shock absorber, strut bearing and steering knuckle to support the suspension system. The strut provides shock absorption and structural support for the suspension of the vehicle while driving on rough roads. A strut can be found at the midpoint of the fender wall.

Most vehicles have four struts, two each in the front and rear. Struts absorb the stress of the car and keep the wheels in position during rough road conditions. A strut is linked to a shock absorber and spring, steering link, car frame and lower control arm. A worn out strut reduces the tire's ability to grip the road. If you have any issues with your struts, you should replace them as soon as possible. Buy Auto Parts stocks a wide range of struts for every car make and model.

At Buy Auto Parts, you'll find a wide selection of OEM replacements and premium aftermarket parts at unbeatable prices. To find the strut assembly that fits your vehicle, select the right year, make and model of your car on our online catalog. And remember, we offer free shipping on all orders in the U.S. above $99. As we have warehouses all across the country, you can be assured of receiving the ordered parts from the closest location, on time. If you have any difficulties in finding the car parts, call our toll-free support line at 1-888-907-7225 or email us at [email protected].

10 Myths About Shocks and Struts
Several facts about shocks and struts are often misconceived and misconstrued. Check out this blog to clear these misconceptions and get a clear understanding about these parts.

How Can You Tell if Your Shocks or Struts are Worn Out?
If you are unsure whether your shocks and struts are behind your less-than-satisfactory driving experience, you can take a look at this page to determine if your shocks or struts display any of those mentioned in this article.

READY TO DIY? SHOCKS AND STRUTS EDITION
This blog entry provides a step-by-step procedure for replacing shocks and struts. If you are a DIYer, this blog is for you!