Shelter in Place: What About Your Car? 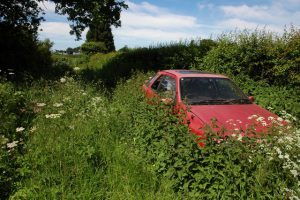 Look, we’re just as tired as you are of every company you’ve ever given your email address to reaching out with their COVID-19 plan. But your car is probably one of your most valuable assets and potentially the most valuable if you aren’t a homeowner. Given the potential economic fallout from this global crisis, taking care of your investment isn’t necessarily the worst thing to do with your newfound downtime. A couple things you can do to take keep your car healthy while it mostly sits dormant:

There are obvious sanitary benefits to getting the trash out of your interior and disinfecting any surfaces, especially touch points like the steering wheel, shifter and all the miscellaneous switches. But cleaning the outside and sealing it with a coat of wax will protect the paint while it sits in the sun or prevent water spotting if it rains. Remove any air fresheners; that stuff is tolerable in small doses but will become extremely concentrated and unhealthy if you leave it sealed up for a week. Also consider a sunshade for the windshield to protect the interior from discoloring or cracking in the sun, or at least cover the dash with a towel.

I know we’re all supposed to be staying home, but eventually you’ll need to get groceries or take out. Keeping your car parked for a long time without any preparation is generally not good for anything. Bring the car up to full operating temperature every time you drive it to keep the fluids circulating and the hoses and seals from getting brittle and developing leaks. Make sure the transmission cycles through every gear. Get the engine up to redline while driving (as safely as you can, anyway) to make sure systems like variable valve timing or cylinder deactivation are used at least once or twice. Contrary to popular belief, just starting the car up without driving it is actually bad for your battery; it takes some energy to start the car, yet the alternator only charges the battery while the car is driving. This also keeps the tires from flat-spotting and gives you then opportunity to move the car to another space if you still have to worry about parking enforcement where you live.

Getting gas was already a germophobe’s nightmare before all of this. During this time, there’s reasons for and against getting gas. First of all, gas is just really cheap right now, so it’s a good time to fill the tank in all your vehicles, even that RV or motorcycle or extra truck you only drive a couple times a year. Having a full tank also prevents condensation inside the tank, which could cause rust if the tank is made of metal rather than a composite. And not to get all doomsday-prepper, but there’s at least some value in being ready to leave at a moment’s notice. Just make sure you avoid the pumps at peak hours and sanitize THOROUGHLY afterward.

Park your car in a safe, visible, well-lit area where it’s hard for car thieves to be sneaking around. Obviously keep the car locked, and consider a visual deterrent like The Club. It’s silly, dated, and no, it’s not 100% unbeatable, but the most stolen cars are very common models anyway. If you had your heart set on stealing a Honda Civic, but walked up to it and saw one extra step to deal with, would you still try, or would you just steal a different Civic 30 feet away?

Maybe you have two cars and are suddenly in a position where you really only need one, or even zero of them.  You could have a dedicated commuter car, then an off-roader or track car for the weekend, or a pickup truck that tows the fun stuff. Maybe you and your spouse both have cars, and now that you’re both working from home, you only need one of them for an occasional grocery trip. In these situations, it’s not a bad idea to prep one of them for longer-term storage if you have a space where you can do so. A couple things you can do to make it easy as possible when you need the car again include:

-Check tire pressure and essential fluids at least once a month

-Plug the car into a battery tender to keep the electronics from dying. Aside from making it hard to start up, a dead battery can also have unforeseen side effects on other electrical systems in the car, like deactivating any theft-prevention systems or losing the memory settings for your power seats.

You’re probably getting a bit of information overload regarding this global crisis that we’re all going through, and we certainly don’t mean to add to it in the name of cheap marketing points. Our primary goal for the past 30 years has been to make it as easy as possible to own an out-of-warranty car by providing quality, affordable parts backed by customer service reps who work here because they also love cars, and want to help people with theirs. That continues today, as best we can, even with everything else going on. If you’re using this time to complete some DIY projects, contact BuyAutoParts for anything you may need for your car, and stay safe!