Mechanics 101: What is an Alternator? 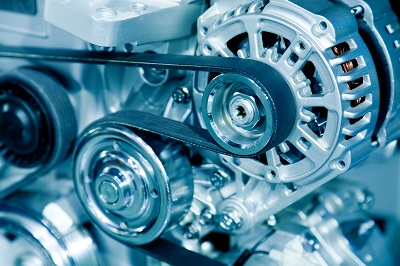 Ask a casual car enthusiast what an alternator is, and you’ll get one of the following five responses:

3)“It runs one of those belts inside the engine.”

Technically speaking, only #3 is correct. You could argue #1 has some truth to it. And the most accurate answer for most people is probably #5. Despite what they THINK it is, even so-called weekend mechanics can’t identify the alternator’s main function. Even though the alternator sits at the front of a car engine, usually in plain sight for everyone to see, it still is widely misunderstood. And as a result, it’s often confused with the battery when trying to diagnose power-related problems.

If there’s one engine component that’s doesn’t need extra ambiguity, it’s the alternator. From our perspective here at BuyAutoParts.com, the best way to describe an alternator is to divide the task into 3 different questions: what it is, what is does, and how it relates to other car components.

The alternator is your engine’s true powerhouse, its energy source for all the electrical components. Many people think the battery is responsible for keeping your lights on, the radio blaring and the turn signals working properly, and that’s partially true. The battery indeed runs your car’s electrical system.

But without the alternator supplying a constant charge, your battery would last only a few minutes – even a fully-charged, new battery. Another way to define the alternator is to understand its name. The component creates “alternating” electrical current from an engine crankshaft, and then sends this electrical energy to the battery.

Let’s take a look inside the typical alternator. The two primary interior components are the rotor and the stator. When the rotor is spinning (thanks to the engine crankshaft), it interacts with the stator to produce electrical AC (alternating current) power, which is then transferred to the battery. Well, not directly to the battery – a voltage regulator plays the “middle man” to ensure the battery isn’t overloaded with too much power. The AC power is also converted back into DC (direct current) energy.

As an interesting historical side note, alternators were known as “generators.” These generators produced DC (direct current) electricity. But in the past 30-40 years, most cars have used alternators, as AC power is better suited to handle the modern automobile’s considerable power requirements, such as heated mirrors, power windows, more robust air conditioning systems, navigation components and much more.

Classic car owners are familiar with the term “DC dynamo generators” or “DC dynamos.” Practically every car produced up until the 1950s didn’t have alternators – they used DC dynamo generators instead. Modern autos still utilize DC power, but the conversion of AC to DC power helps everything run more efficiently; in the good ol’ days, no AC power was generated inside car engines.

An engine-powered crankshaft gets the alternator up and running. This is the “mechanical energy” part of the conversion equation we discussed above (mechanical energy --> electrical energy --> power necessary to charge battery). The engine drive belt is used to power the alternator’s rotor – when the engine crankshaft spins, the belt likewise spins to move the rotor. This is basically the correct response #3 we talked about at the beginning of the blog.

Indirectly, the alternator impacts the car’s entire electrical system. This includes, but is not limited to:

Without an alternator, your car is quickly on the road to nowhere; it can only run on battery power for so long. (Not long at all, actually.) If you need an alternator, BuyAutoParts.com is the only source you need. Our OEM-quality, affordable alternators offer exceptional performance characteristics at the right price. The BAP garage is currently stocked with over 1,000 alternators, so you’ll definitely find what you’re looking for. And with our streamlined, easy-to-use selection process, you can quickly source & select your car’s alternator in no time. Why pay expensive labor costs to your mechanic? Go the DIY route with BuyAutoParts.com – you’ll not only save money, but you’ll gain the confidence and peace of mind knowing your new alternator is installed the right way. For a comprehensive take on how to choose the right alternator, don’t miss our Alternator How-To Buyer’s Guide.

We hope this blog helps clear the fog with all things related to the alternator. If you have any feedback or have a question, let us know – we always love hearing from our customers.