Recently we posted a question on our Facebook page asking which car brand sold the most vehicles in 2013 in the United States. According to numbers from the AIADA (American International Automobile Dealers Association), Ford was once again the car brand which sold the most cars in 2013. Does this come as a surprise to you?

Here is the rest of the data collected by the AIADA: 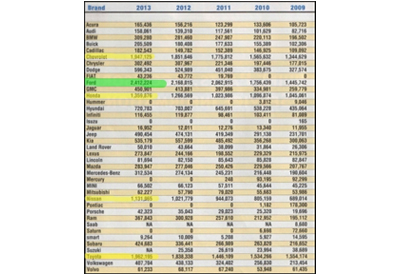 Toyota came in second, Chevrolet in third, Honda in fourth and Nissan rounded out the top 5 for 2013. The top five brands all sold over one million cars and in total 15.6 million new cars were sold in 2013. AIADA felt very positive about the 2013 numbers stating: “That’s good news for international nameplate dealers, who sell some of the nation’s most popular vehicles.”

What’s even more intriguing is the amount of money dealerships made in 2012 (most recently reported year) from service and parts sales. Want to take a guess?

If you guessed in the billions you are right. If you guessed $81.35 Billion then you are exactly correct. Sure, you can say the number should be astronomical as it covers all dealerships in our great country of more than 300 million inhabitants. However, if you divide this up per capita every American spent $259.15 getting their car serviced and purchasing their parts at the dealership. If you divide this up by a realistic amount of people who actually went to the dealership for service and parts (number not officially provided so let’s give them the benefit of the doubt and say 1/3 of Americans serviced their cars at the dealership) American’s spent around $777 a year. This is an insane amount considering it is probably much higher than this since not everyone who needed service takes their car in to a dealership. 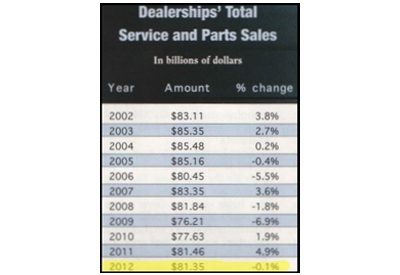 Parts alone cost Americans $45.41 billion dollars; so when we say parts at the dealership cost Americans way too much money, we mean it. This is why at BuyAutoParts.com we have way better prices on all our parts, to save you money! 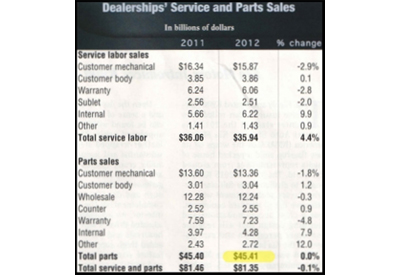 I hope these numbers give you good insight into how big the auto industry is here in the United States and how much dealerships rely on service and parts as part of their business model.