Turbochargers vs Superchargers: The Great Debate

Although the supercharger was invented only a few short years before the turbocharger, they’ve come to represent the familiar poles of technological innovation. The supercharger, with its elegant simplicity and ubiquitous applications in everything from lawnmowers to jet planes, stands for the tried-and-true. The turbocharger, seeming more clever than smart, plays the overeager disruptor. It’s time to settle the great debate: turbocharger vs supercharger—what does the future hold?

As these things tend to go nowadays, the shiny and new is gaining ground a whole lot faster than many in the know had predicted, with nearly half of all new vehicles slated to be turbocharged within the next five years.

This has left many a fan of the naturally aspirated engine scratching their gearheads. There are, of course, clear advantages to the turbocharger design. In principle, they can increase engine efficiency and improve fuel economy. But the elaborate design comes at a cost: an unavoidable lag in throttle response from the boost threshold, and resulting instability when the power surges.

Yet the promise of the (slightly) newer technology seems to be winning the day. Turbocharger sales in the U.S. clocked in at $1.3 bn in 2014, with an expected annual growth rate of 8.8% over the next five years. More saliently, regulation of emissions has been ramping up in an inexorable trend, both domestically and abroad.

In 2010, the government raised efficiency targets for the coming decade, setting the goal of a 30% reduction in corporate average fuel economy standards by 2019 - about the same time turbochargers will start to edge out superchargers in new vehicles. It’s not surprising: new regulations on emissions have been introduced by governments all over the world, and will likely continue to be introduced in the near term. This has left business leaders the world over scrambling to implement new technologies in their production lines that can achieve these aims without compromising the performance standards they’re competing to deliver to their customers.

It’s a tricky balance, but turbochargers do offer the promise of both efficiency and performance - leading top manufacturers into an R&D race to get over the innovation hump. Turbochargers are already gearing up for their next big tweak, with industry leaders like Volvo and Audi developing electric turbo technology that could give a great big spin to the revolution already in progress.

So what do these colliding technologies look like up close, and what can we expect from them, for good and for ill? Let’s consider them each in turn.

Superchargers: How They Work and What They’re Good For

The concept behind the supercharger is straightforward: it forces more air into the engine than there is in the atmosphere, increasing the combustion pressure, and in turn, the power. Basically, it’s a mechanical purveyor of pressurized air. In fact, it’s often referred to simply as a ‘blower’. Its humble origins were essentially as high-power industrial fans used to cool mineshafts.

It’s a simple idea, but a powerful one - easy to apply, easy to tweak for ever greater efficiency. Over the course of the 20th century, all the most storied muscle car designs employed ingenious variations on the same basic concept: pumping pressurized air into the engine to increase horsepower.

Like most mechanical attributes, they have a conventional cost. The air has to be pressurized somehow, and the energy to do it has to come from the engine itself. Through the use of a drive belt or train of gears, the supercharger latches on parasitically, draining engine efficiency as a matter of course - but delivering the charge smoothly and reliably.

Despite the cost to overall engine output, superchargers, with their long history of industrial design, have grown more and more efficient over the years. They’ve been tweaked to near-perfection, and they remain a cost-effective and surefire method of increasing a vehicle’s horsepower.

Turbochargers: How They Work and Why They’re Taking Over 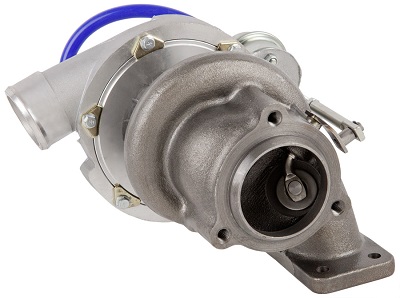 In a sense, turbochargers are a radical tweak themselves to standard air induction technology. The payoff is much the same, but instead of drawing their energy from the engine itself, they take advantage of the exhaust flow produced as a by-product of the engine’s activity. By placing a turbine wheel in the exhaust manifold, the turbochargers take as their energy source the previously unexploited potential of already-burned gas pouring out of the vehicle.

The application remains the same - feeding pressurized air into the engine to increase horsepower - but by using another source of energy to get it done, the drain on the engine’s power is no longer a limiting factor. Potentially, turbochargers can add to a vehicle’s performance without first subtracting from it, the way a supercharger does. On paper at least, that’s an exciting opportunity for designers to maintain the performance standards drivers expect from supercharged vehicles - while also delivering on increased fuel efficiency standards.

It’s easy to see the appeal, especially from a management perspective. In the context of increasingly stringent emissions standards laid out by many world governments, turbocharger technology offers a tantalizing way for auto manufacturers to have their cake and eat it too.

There are challenges, though. Superchargers - aside from having a century’s worth of tried-and-true tweaks in the bag - get their power directly from the engine, making performance as seamless as it could be. It will respond as fast as the engine itself responds. Turbochargers, by contrast, rely on the exhaust flow which, while related to engine activity, isn’t synonymous with it. A suddenly accelerating driver using a turbocharger has to cope with the lag time between the engine meeting the demand and the exhaust from that activity being produced. Fundamentally, demand and supply are out of sync.

What Does the Future Hold?

With the steady regulatory push on emissions standards, turbochargers do seem to be gaining ground at what some traditionalists would call an alarming pace. Already, a storied supercharger past notwithstanding, BMW offers exactly no new models with naturally aspirated engines. Even Ferrari, the red meat of the auto industry, recently announced that it’s doing away with superchargers for good.

Regulation isn’t the only factor working in turbochargers’ favor. From a design perspective, turbochargers have extremely attractive features, especially for the school of Apple-Zen-like simplicity that characterizes much of the current moment in manufacturing. For one thing, they’re small - and getting smaller. Engineers love the freedom this gives them to innovate in surprising directions, like the Swedish three-turbo design that, with a mere 2.0 liter engine, outperformed the 5.0 liter V8 in the new Ford Mustang GT.

The more aesthetically minded point not only to the potential for smaller, more elegant car design, but also to the lower sound profile of turbocharged engines. They’re a lot more quiet, and as cars continue to hustle through an ever-expanding bustle, it might be time to move towards a design that’s more flexible and accommodating than the traditional supercharger.

Still, a classic is a classic, and despite the turbocharger’s precipitous ascent to the top of the design pile, superchargers are likely to remain on low and mid-market vehicles for the time being. The future will be turbocharged, but superchargers will always have their place in the history of air induction technology.

Want to embed this infographic onto your website? Feel free to copy paste the code snippet below, the only thing we ask in return is to attribute the embedded post to in a visible area on the webpage: