For the proper functioning of an automobile, there are various systems that work together and on-board computers which monitor the functioning of various parts. When it comes to the proper functioning of the engine, various mechanisms such as the fuel distribution, fuel injection and ignition timing should be co-ordinated to help it deliver an optimal output power. There are also sensors that ensure the proper working of the engine by sending the requisite information to the control unit. A knock sensor in a car is designed to detect when the combustion in the engine is not being properly controlled. Most newer automobiles come equipped with a knock sensor. This page explains the working of knock sensors along with the causes and symptoms of their failure. 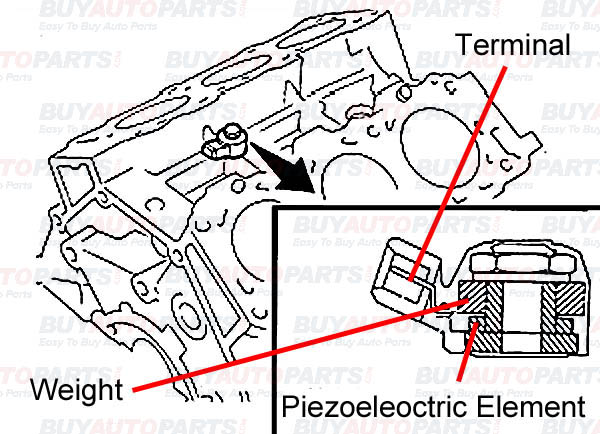 When the piston hits the cylinder wall before it is reaches the top dead center (TDC), the piezoelectric crystal generates a voltage which is sent to the ECU (Engine Control Unit). The ECU then delays the timing accordingly to protect the motor. The timing delay is generally made in steps of two degrees until the problem is corrected.

The common term that mechanics use to describe this issue is "knocking", which literally means that a knocking sound can be heard from the motor. This sensor has been designed to act as if a mechanic was listening to the motor and keeping an eye on things for the driver. The knock sensor is usually mounted on the engine block, cylinder head or intake manifold. Generally, inline engines have one knock sensor located in each engine bank and V-shaped engines have one or two sensors installed in each engine bank.

Problems in a Knock Sensor

Generally, the knock sensor can fail due to natural wear over time. The sensor may also become corroded, and thereby, fails to function properly. Otherwise, there may be some problem with the sensor wiring.

Symptoms of a Defective Knock Sensor

The obvious symptom of a defective knock sensor is a "knocking" sound from the engine while driving at high speeds. You may also hear thumping noises that will get louder over time. Other common symptoms include vibration of the automobile, or engine misfire when the vehicle is started. Acceleration problems, decreased fuel economy and increased emissions are also some of the effects of a malfunctioning knock sensor.

A visible indication of a faulty knock sensor is the glowing of the Check Engine light. However, using a low-quality gasoline may also cause detonation, triggering the Check Engine light. Look into the problem carefully and follow proper diagnostic procedures to narrow down the underlying issue. Defects in the knock sensor generate diagnostic codes from P0325 to P0334, with each code indicating a specific fault in the sensor.

Any issues with a knock sensor should be addressed immediately, as continuous pre-ignition can damage the pistons, and eventually damage the engine itself. If you are a regular DIYer, you can install a knock sensor yourself, as it simply needs replacing the sensor and connecting the proper wires.

Thanks for taking the time to read up on knock sensors in our site. We hope you found this article useful and informative. If you did not find the information you were looking for, do not hesitate to contact our support team. One of our automotive professionals will get in touch with you to clarify any queries you might have. To buy a replacement knock sensor at BuyAutoParts.com, click here.

"How To" Home  |  BuyAutoParts Home