In 1998, Dodge phased out the much-lauded 12 valve 5.9L Cummins turbo diesel engine in their medium-duty pickup trucks with an improved 24 valve version that featured common rail injection and increased power output. Further refinements of the 24 valve 5.9L Cummins further increased performance with a high-output version which offered over 100 horsepower more by the end of the engine's run in 2007. For nearly a decade, the 24 valve 5.9L Cummins remained the power plant of choice for a generation of diesel-powered Dodge trucks and it quickly secured its own legacy as one of the best engines offered by Dodge.

While usually thought to be one of the last true bullet-proof diesel engines, the 24 valve 5.9L Cummins engine does have a few common problems that can cause serious issues over the long term. Chief among these problem areas is the Holset turbo which can fail, especially on higher-mileage vehicles. This usually causes a lack of boost pressure in the intake, leaving you down on power, or in the worst case, catastrophic engine damage if left undiagnosed.

The most common point of failure for the factory 5.9L Cummins turbo is the oil seals. Often, worn seals in the center hub rotating assembly will allow the lubricating oil into the intake and also the exhaust. Engine oil in the intake can be particularly bad in a diesel because it can not only clog your intercooler, but it can also cause an unexpected increase in engine RPM beyond your throttle input. Oil in the exhaust system on the other hand can damage your oxygen sensors and cause excessive smoke with a bluish tint from the tailpipe. While it's fairly easy to notice a smoky exhaust and an oily tailpipe, oil within the intake can only be observed by disassembling the post-turbo charge pipes and induction system. Some oil residue is common within the intake system, but if you find pools of oil you're looking at a severely worn turbo.

Another type of turbo failure occurs when the bearings within the center hub rotating assembly begin to wear. This can be caused by age and high-mileage, or from a lack of lubrication because of a clogged oil feed line or failed oil seals as discussed above. Because a typical turbocharger can spin much faster than your engine, up to 200,000 RPM, excessively worn bearings can cause the compressor fan to contact the sides of the compressor housing. This will usually cause some chatter from under the hood and in extreme cases cause metal shavings and pieces of the compressor blade to enter the combustion chamber where it can cause serious damage to the engine's internals.

The earliest warning sign of bearing failure is a loud whine or whistle during acceleration that increases or decreases with RPM and load. You can also visually inspect the turbo for excessive bearing play by removing the intake tube that feeds the turbo and then moving the compressor fan with your fingers. A small amount of fore and aft play is the compressor shaft normal, but any play to the side or any amount that causes the fan to hit the sides of the housing indicates worn bearings. The compressor fan should also turn freely by hand without resistance. If you encounter either situation, you'll need to replace the turbocharger unit.

When it's time to replace your original turbo, make sure you order the correct one for your specific truck. While the 5.9L was available in these trucks for more than 15 years, there are a couple slight variations listed below: 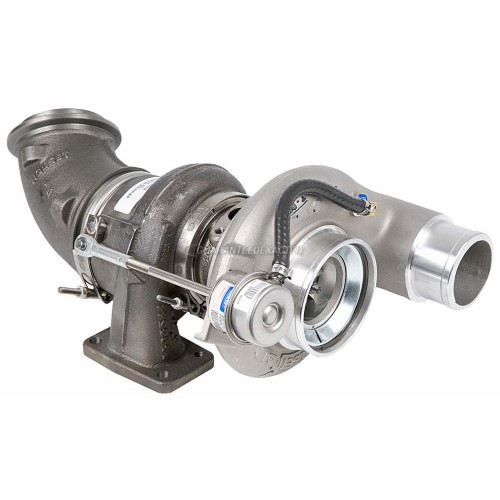 BuyAutoParts.com stocks Genuine New Holset Turbochargers for the 5.9L Cummins diesel that can restore in your Dodge Ram truck the performance lost from a worn or failed turbocharger. These turbos are new just like any other Holset turbo that you can purchase from your dealer, but without the dealer prices. We also stock complete Holset Turbocharger installation kits for the 5.9L Cummins diesel that include every gasket you need to hook up your new turbo right. We recommend purchasing the 5.9L Cummins turbo installation kit with oil feed line so you can be sure that your new turbo is lubricated without restriction and that your oil system isn't contaminated by metal shaving from you old worn-out unit. If you have any questions about which turbocharger you need for you 5.9L Cummins diesel, call one of our certified parts experts at 1-888-907-7225, drop us an email, or use or easy on-site live chat feature found on every page of our site.