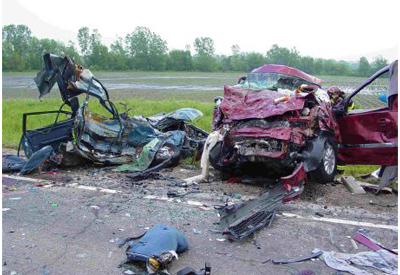 Last week in Kent County located in southeast England, a mind boggling chain-reaction car crash involving 130 vehicles ended up injuring about 200 people, 33 of which were hauled off to the hospital.  Apparently visibility was poor due to heavy fog and was the primary cause for the huge pile-up. Fog shouldn’t be a surprising climate element in England, but the drivers on the bridge were clearly not prepared for it. Those at the scene stated that visibility was only a mere 10 to 15 feet, and many were tailgating the car in front of them. These two elements mixed together is the recipe for disaster. The bridge was closed for nine hours, and it took 30 ambulances and 6 fire engines to clear up the horrendous scene. News reports say that, “this is the biggest single fog accident that Britain has ever had”. The aerial view of the Sheppey Crossing pile-up looked like a bunch of hot wheels hurled together, totally unreal. Thankfully no one died in this massive string of car crashes, but it got us thinking: What are some of the traffic accidents or pile-ups recorded?

Bridges are man-made, and there is always room for error. On the evening of August 1st, 2007 during rush hour traffic, the Mississippi River Bridge on the I-35W suddenly collapsed and plummeted into the river below. About 100 vehicles were on the bridge during the ruin, including a school bus carrying 63 children heading home from a summer field trip.  Only a few vehicles were submerged, but many vehicles were stranded in the debris, and several cars caught fire. 13 people were killed and dozens were injured. This was like a scene from Final Destination, only real.

Thick fog claimed 3 lives and injured 277 in the early morning 2008 accident in Abu Dhabi. Over 60 cars had collided, and up to 20 cars ending up in flames. Local police stated that there were over a dozen buses carrying upwards of 300 workers were involved in the crash, causing the high injury rate. The pictures of the charred vehicles and the wreckage strewn across the roads are unbelievable, and the scene quickly was dubbed the biggest traffic accident in the country’s history.

Due to heavy rain and obvious speeding on the Autobahn, a series of three pile-ups on a 20 mile stretch injured more than 65 people and involved a little over 250 cars. No deaths reported due to this accident, though 10 were critically injured.   Emergency services had 3 helicopters, 40 ambulances, and over 350 firemen to round up the wounded and clear the roadways.  Police stated that the drivers weren’t leaving enough room between cars to quickly respond to collisions, and the slick road conditions definitely did not help.

Okay, so this wasn’t due to an accident, but this traffic jam is definitely worth noting. 10 days?! That’s insanity. The congestion was the result of maintenance work and the sudden influx of coal trucks on the 100 kilometer 110 Expressway. Many drivers were able to move their cars only 1 kilometer per day. To put this into perspective for our non-metric readers, that’s about .6 miles. If I were in that situation, I’d just leave my car there! Another major contributor to the jam is the sheer number of drivers in Beijing. In 2010, the number of vehicles in Beijing increased by an average of about 2000 cars per day for the first 6 months of the year, and the total number of vehicles is expected to hit 7 million by 2015. (Read more on the cities with the worst traffic: “5 US Cities with the Worst Traffic")  The Chinese government is planning to expand its subway system in hopes that more people will take advantage of public transportation.

Now, I hope you never find yourself in situations like these, but if you do end up in a minor car accident, this is a good read: What To Do if You’re Involved in a Minor Car Accident