What to Do if Your Car Catches Fire 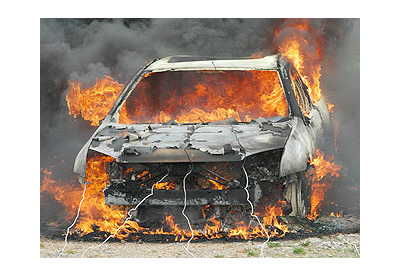 You never think it will happen to you. That’s what I thought anyway.

Here’s the background story: This was in late January, and my boyfriend and I were on my way home from a snowboarding day trip from Big Bear Mountain. The drive home is definitely not a short one; we were going on our fourth hour driving due to the heavy traffic of people leaving the mountain for the night. We were maybe 15 minutes out from the city of Escondido when I hear a loud thud coming from the engine of his Camry. Immediately after, the entire windshield is clouded by a huge plume of white smoke. In panic, my boyfriend pulled over to the emergency lane off the freeway, turned off the car, rushed to the hood, and before he opens it, I notice an orange glow emitting from the cracks of the hood. Crouching down, he confirmed the worst: the engine was on fire.

What do I do? I’ve never been in this situation before, and in no way had prepared for it. I’m pretty sure that we didn’t even have water in the car, let alone a fire extinguisher to put it out. The only thing I could do was back away from the car and call 911. At this point the fire had grown and taken over the front end of the car. The fire department responded surprisingly fast; apparently a Good Samaritan had driven pass the scene and called it in right before we did (I guess in the dead of the night, it’s not so hard to miss a flaming car).The firefighters acted swiftly and within 5 minutes they revealed the remnants of his trusted old Toyota Camry.   You can view pictures of the incident at the bottom of the post.

So what should YOU do if this happens to you?

The National Safety Council recommends the following steps on how to react if your car catches fire:

1.  Immediately move to the closest safe place to stop. Signal while changing lanes.

2.  Stop the car and turn off the ignition.

3.  Get every person out of the car, and don’t allow anyone to go back to retrieve personal items.

4.  Don’t try to put the fire out yourself. Opening the hood of the car increases air supply and may accelerate the fire.

5.  Move at least 100 feet from the burning vehicle to avoid the flames and toxic fumes.

8.  After the fire is put out, contact your insurance agent.

9.  Take photos of the damage and collect information from any witnesses.

10.  When the firefighters say that it’s safe, you can remove personal items from the vehicle.

11.  Call a tow truck to have the car towed to a repair shop or junk yard.

There are some things you can do to prevent this from happening. Your best defense to make sure that your car is up to speed, and you’re not ignoring warning signs. Here are some symptoms that could lead to vehicle fire:

•  Spilled oil under the hood left over from an oil change

•  Fluid leaks under the vehicle

•  Loud sounds from the exhaust system

•  Missing cap from the oil filler

According to the National Fire Protection Association, in 2011 there was approximately 187,500 vehicle fires with 270 deaths, 1,020 civilian injuries, and $1.0 billion in direct property damage. If there’s something you can do to prevent your car from being part of this statistic, do it! Don’t wait!