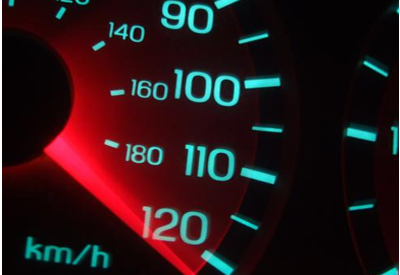 We all do it. You have to be somewhere, and you should have left about 20 minutes ago, and now you’re for SURE late. So you speed the entire way there, in hopes of shaving some time off your commute and getting there as fast as possible. Is this all worth it? According to a new study done by Automatic, speeding will save you only minutes on your trip, while costing you several hundred dollars more per year in gas. {Read more about Automatic-- Automatic Link: A Smartphone Application That Helps You Take Care Of Your Car}

How did they test this? Well, Automatic produces an automobile accessory that links your smartphone and car together to track your driving habits and fuel efficiency.  Automatic’s smartphone app gives drivers feedback on what they can do with their driving to be more fuel efficient, and eventually save money on gas. To test the actual cost of speeding, Automatic tracked the driving of one of their engineers, Ted, and his Subaru Outback (apparently he likes to speed).

The results determined that Ted drives about 5 MPH faster than the average Automatic user, but he only saves 4 minutes for every hour he speeds on the road. In addition to that, the extra speeding cost him an extra $46 on gas per month, meaning that hes pays an additional $550 a year on gasoline over the average driver. Based off of their fuel efficiency chart versus speed, cars significantly lose efficiency at higher speed, especially when going above 70 MPH. No matter how you spin it, the opportunity cost of speeding does not outweigh the cost of being fuel inefficient.

Based on this observation, Automatic tracked a few other cars on the road (the Prius, Civic, and 328i), and the results followed the same general pattern shown by the Outback. Moral of the story? Don’t speed, it’s expensive and you don’t actually save any time. {Related Article: Saving Money On Gas The EASY Way}